What is the name of this tree in English?

people call these as chavaka chettlu in telugu.  however can you pls tell me what are they called in english 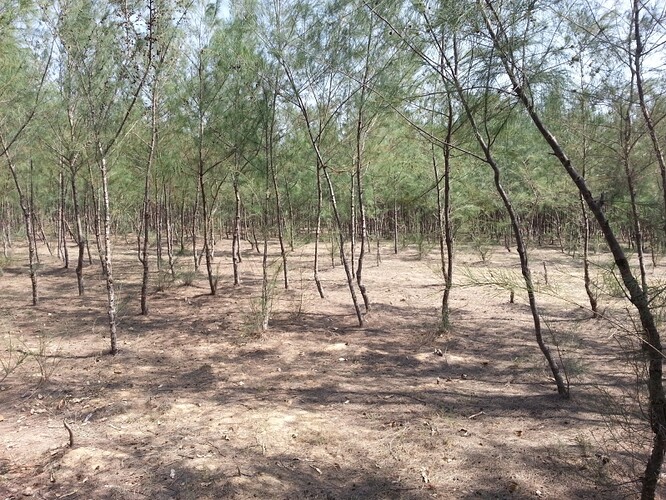 The picture is taken from away, I could not see leaves or fruits.

I can guess it is Casuarina equisetifolia. (sarve in Kannada and Telugu) See the attachment if the fruits and leaves looks exactly like this then what I am saying is good.

It grows long, you can plant them on peripheri of farms, it attracts any fungus leaving your cops unharmed. It is good timber. 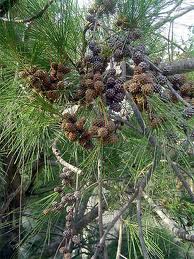 Botanic description
Casuarina equisetifolia is an evergreen, dioecious or monoecious tree 6-35 (60) m tall, with a finely branched crown. Crown shape initially conical but tends to flatten with age. Trunk straight, cylindrical, usually branchless for up to 10 m, up to 100 (max. 150) cm in diameter, occasionally with buttresses. Bark light greyish-brown, smooth on young trunks, rough, thick, furrowed and flaking into oblong pieces on older trees; inner bark reddish or deep dirty brown, astringent. The branchlets are deciduous, drooping, needlelike, terete but with prominent angular ribs, 23-38 cm x 0.5-1 mm, greyish-green, articles 5-8 mm long, glabrous to densely pubescent, dimorphic, either deciduous or persistent. Twigs deciduous, entirely green or green only at their tips. The minute, reduced, toothlike leaves are in whorls of 7-8 per node. Flowers unisexual; perianth absent, replaced by 2 bracteoles. Male flowers in a terminal, simple, elongated spike, 7-40 mm long, borne in whorls with 7-11.5 whorls/cm of spike, with a single stamen. Female inflorescence on a short lateral branchlet, cylindrical, cone-shaped or globose, 10-24 x 9-13 mm; bracteoles more acute, more or less protruding from the surface of the cone. Infructescence a woody, conelike structure. Fruit a grey or yellow-brown winged nut (samara). Seed solitary. Casuarina is from the Malay word ‘kasuari’, from the supposed resemblance of the twigs to the plumage of the cassowary bird. One of the common names of Casuarina species, ‘she-oak’, widely used in Australia, refers to the attractive wood pattern of large lines or rays similar to oak but weaker. The specific name is derived from the Latin ‘equinus’, pertaining to horses, and ‘folium’, a leaf, in reference to the fine, drooping twigs, which are reminiscent of coarse horse hair.