Turmeric as intercrop in coconut to raise farm income?

The coconut farmer was worried much about poor income from his coconut grove in over 3 acres. All he could earn from 3 acre coconut plantation was just one lac rupees per year . After deducting expenses , his net income was just around Rs.76,000 .

After a long discussion we advised him to go for turmeric as intercrop.So he accepted this idea and grew turmeric . Planted seed rhizome in the month of June before onset of South west monsoon and harvested in the month of January. He obtained 32 MT of turmeric from 3 acres land. The processed turmeric quantity was 18 MT . He sold it @ Rs.30 a kg .This brought him an additional income of 5,40,000…

Part of the turmeric was sold afresh in Pongal festival in local market .This fetched him an additional income of Rs.27,000 .

An important aspect to note here is when turmeric was cultivated as intercrop in coconut , the coconut plant also started producing more fruits .

Here the additional cost for cultivating intercrop of turmeric was Rs.86,000 for 3 acres.

So instead of sole crop , suitable intercrop or companion crop can effectively use space and save time to earn more money in less time … 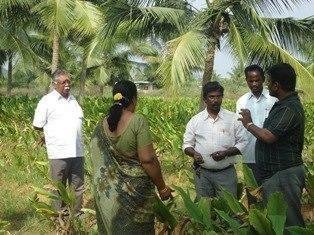 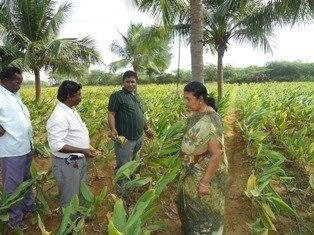 Is it advisable to grow, fodder crops - like CO4 as intercrop with coconuts to generate additional income?

Thanks for your inputs

Is it advisable to grow, fodder crops - like CO4 as intercrop with coconuts to generate additional income?

Thanks for your inputs

Fodder crop is one of the best intercrop in coconut . The fodder crop Co4 grown in coconut is highly palatable for dairy cow …But you must see that the intercropping of fodder in coconut will have to be done in such a way that it should not compete for nutrients available for coconut . Further if you have planted tall coconut specifically Tiptur ( karnataka tall ) coconut at the spcing of 30 ’ either side , the fodder cultivation is fr excellent because the partial shade make the fodder tasty , succulent and highly palatable for dairy cow…

5 years back some of my farmers even set up poultry farm inside coconut plantation along with fodder as intercrop in coconut . The birds sometimes die in summer and succumb to disease due to hot summer when mercury level goes up in the atmosphere…But when you set up poultry farm in coconut along with fodder crop , the local weather is moderated and birds grow healthy. SO the coconut is one of the best component part in an integrated farming system…The poultry manures can be used for manuring both coconut and fodder…

Sorry for delayed reply. Thank you for your inputs Mr. Ramu

For turmeric intercropping with coconut, please advise on the season to plant the seeds and what is the cycle .