Leaf curl disease and its management

Leaf curl disease is one of the major diseases in the World caused by a virus. This virus attacks crops like cotton, papaya, tomato, bhendi, chillies, capsicum, and tobacco and causes major economic losses to the farmers. The leaf curl disease is caused by a complex of whitefly ( Bemisia tabaci ) transmitted Begomoviruses having monopartite genome with circular ssDNA associated with satellite (beta and alpha satellite) DNA molecules. The disease generally appears in the end of June about 45-55 days after sowing and spreads rapidly in July. The disease progress becomes slow in August and almost comes to a halt by mid October. The initiation of disease is characterized by small vein thickening (SVT) type symptoms on young upper leaves of plants. Upward/downward leaf curling and leaf thickening followed by formation of cup shaped leaf laminar outgrowth of veinal tissue (leafy enations) on the abaxial side of the leaves is another important symptom. The viral incubation period ranges from 10-18 days. 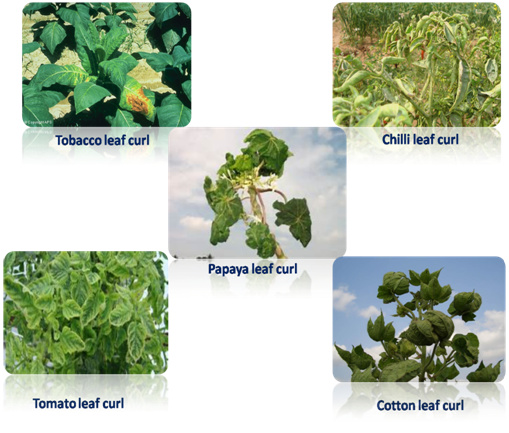 Based on a study conducted during 2013-14 season at three locations in north zone in India, it was observed that earlier known resistant varieties and hybrids released from different state agricultural universities and companies for north zone were now showing susceptible to highly susceptible reaction to the leaf curl virus probably due to appearance of new viral recombinants and strains. According to AICCIP annual report on cotton, there is an estimate of 16 to 50 % seed yield loss in India only due to leaf curl virus.

Management options:
• Cultivation of high yielding resistant and tolerant varieties especially in the hot spot areas will ensure remunerative prices for the crop.
• Avoiding mono cropping and viral susceptible varieties and hybrids mainly in the hot spot areas.
• Prophylactic use of an organic viricide called V-Bind (2-3 ml/lit of water) from Vanproz at early stages of crop growth to control virus spread.
• Controlling whitefly vector at early growth stages of crop growth with the help of neem oil (1 lit/acre) or Monocrotophos (300 – 500 ml/ acre).
• IPM measures like use of yellow sticky traps should be encouraged for reduction of white fly population.