Climate Change and its effects on Indian agriculture and vice versa

Hi all
Leonardo Di Caprio had to say this after winning oscar
well “JUNGLE BOOK” movie released, its a great movie to watch
jungle book brings back my childhood memories,fun i had , greatest time on earth ,words are not sufficient to explain
jungle book brings me back my school days, school year used start on june 1st(karnataka)
June first means onset of monsoon ,like clockwork as though some one has kept an alarm for rains (at the most 1-2 days variation)

Now June is more like summer, no rains
my observations and analysis(limited to my district Hassan Karnataka but elsewhere similar things are happening)

1)  Massive deforestation
for need/greed trees were slaughtered visible reduction of forest area and also trees in semi urban/urban area
also trees attract clouds and rains
villagers and farmers for any purpose if they need wood/logs just go to the forest cut a tree, bribe forest guard, get away.as simple as thaat as forest is govt property nobody cares
i purchased agri land nearer to forest in Salagame hobli of Hassan dist (almost half is gone)in 2010 since they i am observing 10% reduction in forest every year

4)Endangered species, many  animal/birds are rarely seen now (sparrow,peacock etc)
ignorance of villagers and farmers contribute greatly
It doesn’t matter to people ,they just want to eat these  animals/birds . In my are there were 100’s of peacocks in 2010( one of the reasons why i purchased agriland) i have seen villagers going in search of peacock eggs  and peacocks to eat them

when i was working in  B R hills Karnataka ,LTM(lion tailed macaque) international price around 5-6 lakhs were eaten by tribal people and were sold to others for alcohol, when advised about rarity of species and importance of keeping such species they(including forest guards) used to laugh at us

Climatic changes observed by me(am not an expert but i have observed these things)
monsoon never comes in time usually gets delayed  which impacts agriculture
when it comes, it’s like it is taking revenge (drought for 2 months and all the rain that should have come in 2 months will come in 2-3 days causing floods and more damage)
Impact of Indian agriculture  on climate
farmers use heavy chemicals/pesticides for short term gain which kills biodiversity
farmers exploit underground water to maximum extent(a farmer enjoying GANGA KALYANA yojana power supply used to drench his land even when no crops/no plan for a crop just because he had bore well and good power supply)
farmers don’t care about soil erosion
they are not worried about future(water scarcity,new pests, lack of bio-harmony)
they are least bothered about deforestation

when compared to many countries most of the yield are nearly less than half to 1/5th
Although total amount of rainfall will be around 80-90% of normal ,its distribution will be uneven, so is its usefulness

My sister is running a  small school and to create interest about environment i wanted to plant few trees with the help of students and permission was sought from parents. Most were against any such thing (they said they are sending children to study not to make their hands dirty)

i convinced teachers and some students from Govt school to plant some trees in their school .with a letter from school principal i went to  Govt nursery and they were less than helpful (no plants were given) then i purchased few plants from private nursery and with help from"enthusiastic" students(20)  i planted them( around 50)  in june 2013(beginning of school year) and asked students to take care of those plants. after few months when i visited to see the plants i was shocked to see only 6 plants left

( i was actually happy to see 6

In one of the School for the rich when i asked kids where  and how do they get rice,coconut,fruits unanimous answer was from supermarket shopping!!!

what i have learn’t  is You cannot do anything at community level, if you want to do anything then do it at individual level , don’t take/expect any help from anybody/any authority
i want to plant atleast 25 plants /tree’s per year
so i have decided to give back nature what it is giving to me, every year i am planting 300 trees(as i cant take care  of all the plants with my present income,hoping 10% will survive)

kindly suggest how as an individual i can do my best

Be assured that you successfully planted one seed of your idea in me. I will try to plant at least 1 tree per year. I am sure the idea in this post must have touched at least couple of people who in turn may keep the idea rolling and get the same multiplied.

Now, to make things easy, can the forum friends help on below points:

I will try to plant at least one in this month and update. Even if I fail I will update as a reminder to myself for the next month ;-).

There is a saying in Telugu language , “Udutha Bhakthi”, means giving our small hands for supporting a noble cause.

All we should follow . If at all, we mingle, we can do little, only a leader required.

One more idea! Not sure if it is feasible.

We have members from many cities. Let’s make groups area-wise or town-wise whichever is feasible. Then we will post advertisement on Farmnest and other social media that we render free service of planting trees at their home gardens / backyards etc. If there is any personal request of the type of tree, then we can exchange seeds/plants through the forum.
During the process we can collect contact info, document the interests related to organic food preferences or any subjects of similar kind from the house owner and make database for future use.
We can create a facebook group exclusively for this activity of free afforestration.
The above are just some pointers to help conceive more practical implementation.

There will be definitely Pros & Cons of this approach. Request forum experts to highlight possible COns especially to avoid any security risks of future etc…

Please pour in with suggestions.

Hi, in Bengaluru we have treesforfree.org which is doing remarkable work. They plant trees in apartments, housing colonies, schools, layouts etc.  They have a very noble goal and encourage volunteers to take part in their tree planting drives.  Surely they can be a great ally for making your tree footprint on this lovely earth

Good ideas for sure. If anyone has proposals to leverage farmnest platform to support such initiatives, we are more than happy to.

Thanks for sharing the info about treesforfree.org.
Can you please let us know as to how this organization which is already functioning & well established works so that members in other towns/villages can adopt similar approach?

Hi Guru, Mrs.Janet runs this trust. Normally I have known that she operates in and around Bengaluru. Most of the volunteers are from tech companies mainly, as per my observation. This thing runs because of her passion for trees and the commitment of her team (people who actually do the hard work) + the peripheral efforts of the volunteers.  I think she is continuously looking for donors/help to support this cause.  You may please speak to her (her number is listed on the website).  She is a very warm and wonderful person.

School kids can be taught how to grow a tomato or orange plant from seed… this can be done using paper tea cup… the paper cup with the seed can be left in the class until it starts germinating… once the kids start to see the saplings they get interested… this can be planted inside the school premises… with the kids name… the fruits from the plant can be sent back to his house… with which the parents will be happy also.

Planting Fruit-bearing plants are the best ones but also vegetables are good too…similarly Beans, Potatoes and Onions can be easily grown… at least there will not be scarcity of onion if all schools grew it

Japanese school children grow their vegetables in their own school :
youtube.com/watch?v=hL5mKE4e4uU

guerrilla gardening: is practical in road and other govt properties( i am doing it since 2014) 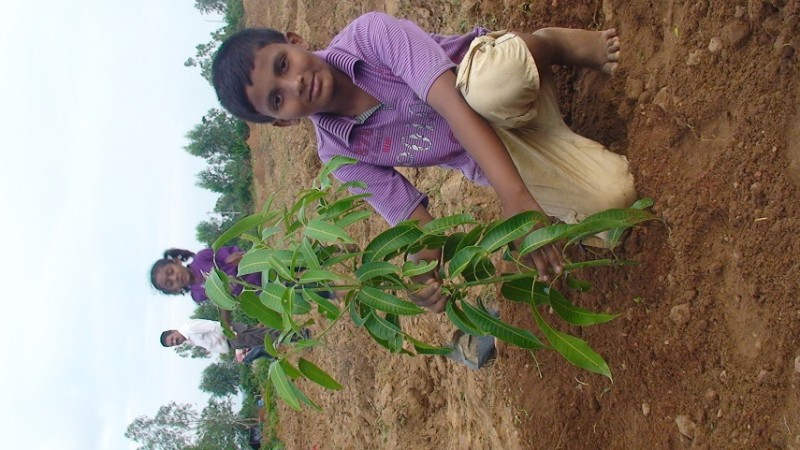 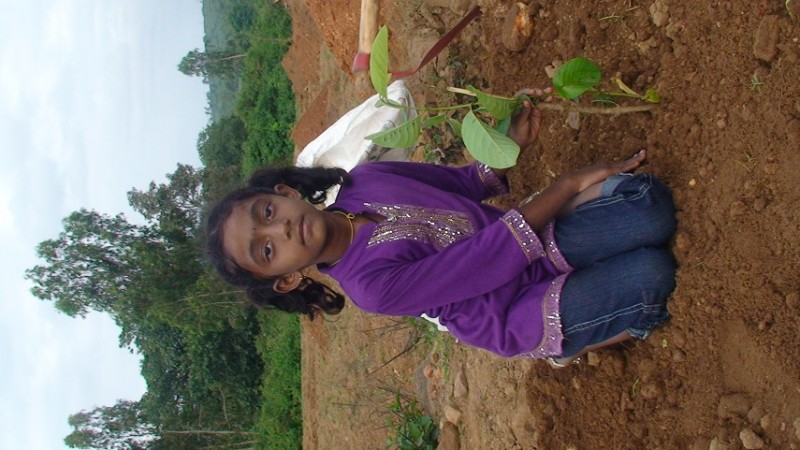 here is something which can bring a smile

you can reach out to them probably.

Idea was to instigate some love towards nature,farming
Attaching pics 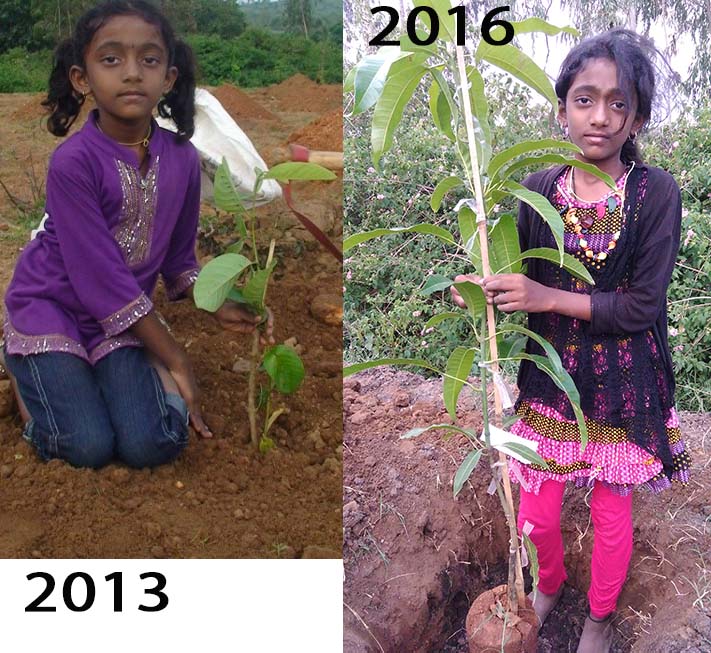 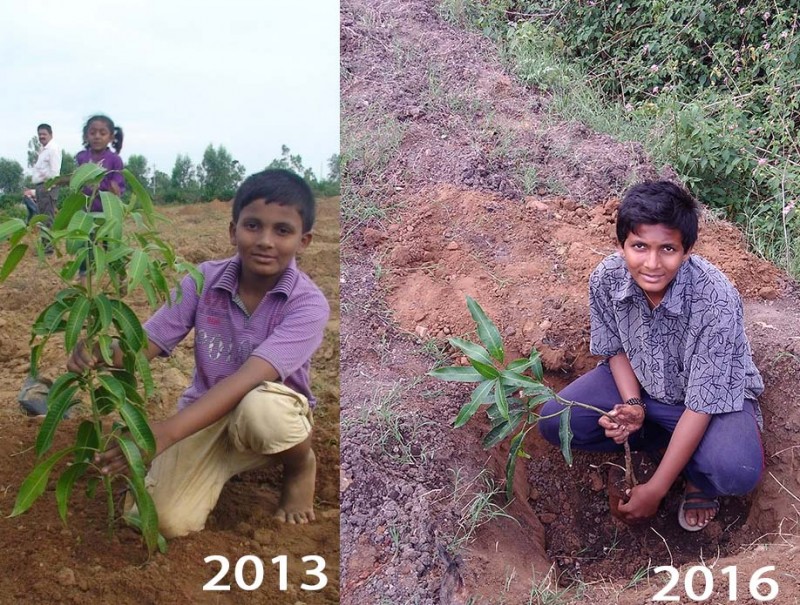 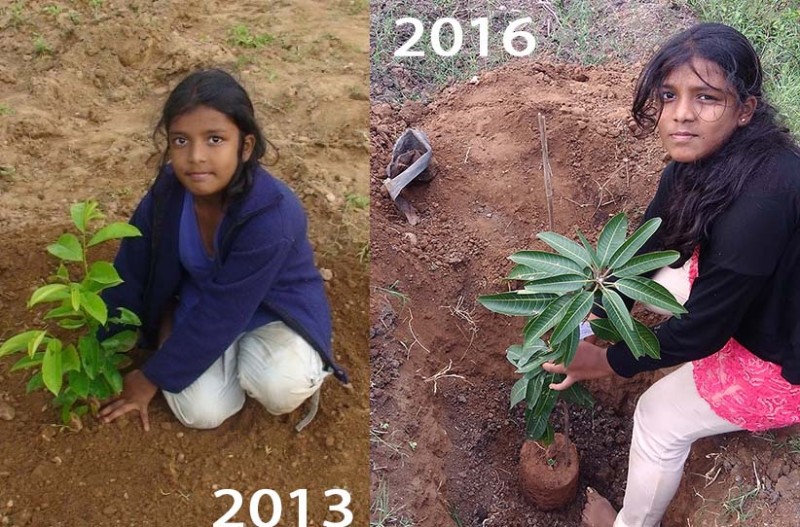