There are black/brown spots on the new emerging leaves of the G9 TC banana plants that were planted in my farm abt a month back. Not sure if it is due to deficiency of some micro nutrients or some fungal attack. Would appreciate if the experts can comment on it… 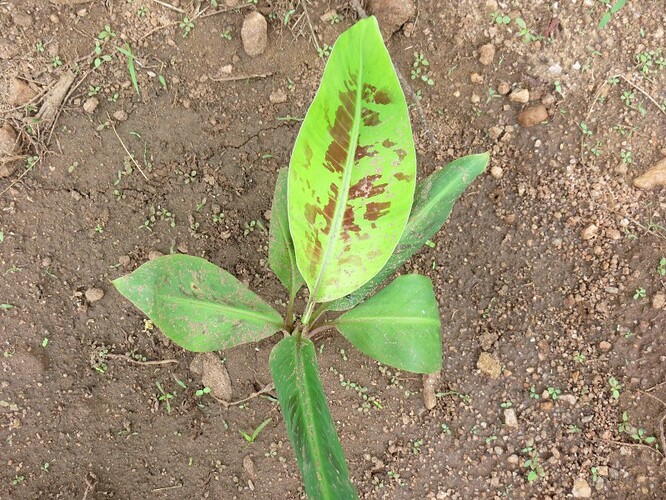 This is not a problem. It is characteristic of G9 bananas. There is nothing to be worried about.

On a side note, have you compared “Mangala Banana Special” (this is what you mention to me over the phone) and IIHR Banana Special? Any inputs/suggestions?

Biju, I dont know Mangala Banana special. May be you would have heard from someone else. IIHR banana special is good. I have used it.

The dark blotch is varietal character for Grande Naine banana and will disappear naturally in due course.
You know, the TC plants are fed with water soluble fertilisers(WSF) in the nursery and you may have to continue with WSF to avoid development of white patches due to no nutrition.

Hello Friends, I am new to the forum.
I am settled in Delhi and have a small farmland holding in my native place in Ambala, Haryana.
Recently, I thought of putting my land to some good use and with the help of government subsidy, buit a poly house in One acre where I have successfully taken two crops of cucumber and presently growing coloured capsicum. My 23 year old son is looking after all the operations.
Encouraged by the success of initial experiment, we studied (theoretically only) about banana cultivation and have planted 6000 banana plants in 5 acres @ 1200 plants/acare @ 6 x 6 feet (in open farms). Variety is G9 TC plants. Transplanting was done between 6-10 August, 2017. Before starting, I also visited a well known banana cultivator - Mr. Ram Gopal Verma of Barabanki, UP, a couple of times and was convinced by the results.
So far, plants are doing well. I too had the black/brown spots on the leave and thought it to be sigatoka. I even applied the spray for the same. But the spots persist.
Later through various sources I came to know that the spots are variety specific in G9.

However, I have a few questions :

I would also like to visit some banana farms in South India to understand the crop better. Can any one help ?

NOTE : I am probably the first farmer to grow bananas on a commercial scale in Haryana and hence there is no one nearby to help and guide.

Sir are you still growing bananas near Ambala?
How you are fighting with frost?

Can I have your cell number?