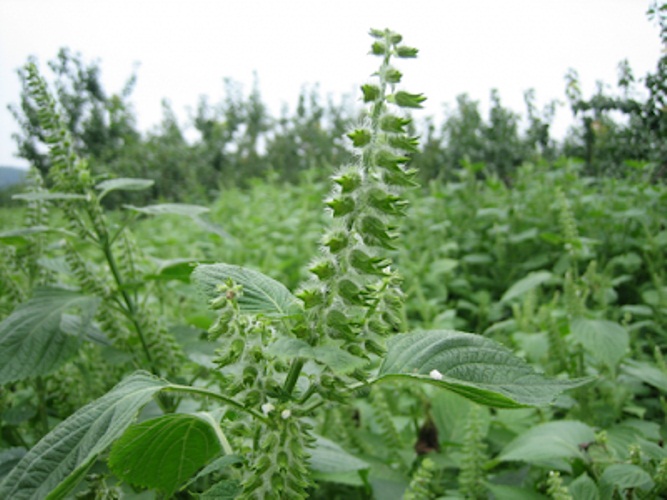 The major producing countries of perilla are China , Japan , Korea etc.
Probably originated in China because China is the main area of diversity of Perilla and the history of cultivation of Perilla crop is very old in China .

In India, it is cultivated in an unorganized manner to a very limited scale in the northeastern hill region i.e. Kumaon, Garhwal and Himachal Pradesh and in Northeast farmers grow this crop in certain pockets under jhoom (shifting) cultivation or in kitchen garden in a limited scale
Perilla is used since ancient times in herbal medicine, as a garnish and as a natural colorant in Asian countries.

Perilla seed which is slightly bigger than a mustard seed, and looks a bit similar as sesame , and having a rich taste and nutty flavor .

The leaves are cooked as vegetable in Nagaland and Manipur .
The tribes of Meghalaya enjoy its ‘Chutney’ with ‘Soh-phlang’ tubers .
In China, Perilla seeds are used for oil extraction or they are crushed and added to cooking for flavoring.
In Japan, the seeds are roasted and then powdered for use in traditional foods for flavouring, the leaves, flowers, clusters and cotyledons dried in sun and are also used as condiments

Perilla seeds contain 40-45% of a oil having 64% linolenic acid, an omega- 3 fatty acid which is generally absent or present in very low proportion in polyunsaturated fatty acids (PUFA) component of different oilseed crops which is used for edible purposes

Perilla leaves contain a special flavour, aldehyde and abundant minerals and vitamins
A volatile oil is also distilled from the dried foliage of the plant which is extensively used as a flavoring agent, in which Perilla aldehyde is the desirable flavoring compound .
One of the aldehyde isomers is 2000 times as sweet as sugar and four to eight times as sweet as saccharin, because of which it is used as a tobacco sweetener .